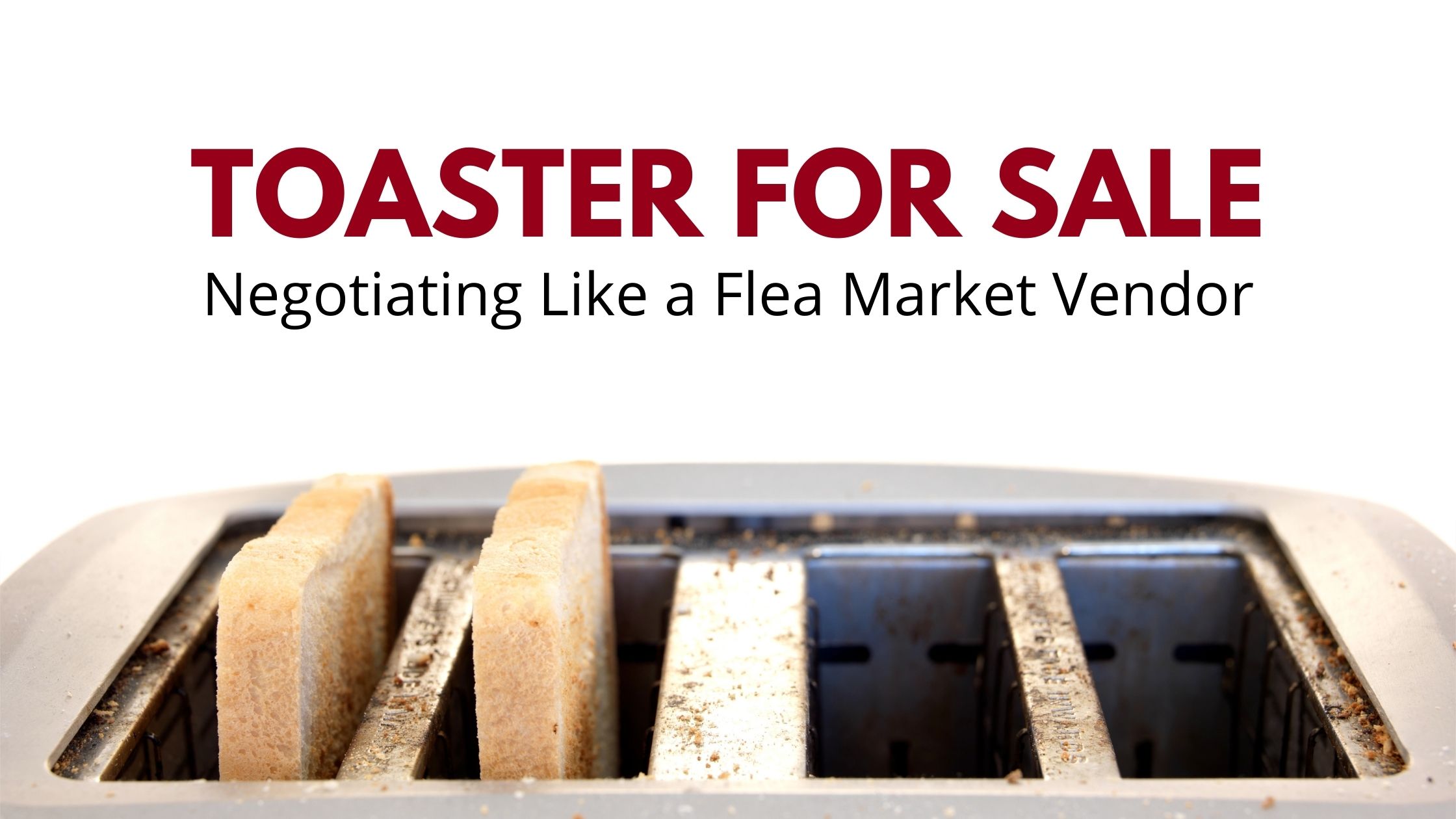 “How much for the toaster?” asks the buyer.
“Five dollars,” said the seller.
“I’ll give you three,” the buyer replied.
“It’s five,” the seller repeated.
“How about four?” the buyer persisted.
The seller stood his ground and for the third time repeated “It’s five.”
Ten minutes later the buyer returned and said “Fine. I’ll give you five.”
And the seller calmly said, “It’s ten.”
The buyer walked away AGAIN in a huff.

The seller’s child, who was present, stood there in disbelief – mortified, embarrassed and confused about why her father wouldn’t take money offered to him by a stranger for a used toaster.

This is a true story. The story of my dad Carmie Trimarco, a dogged salesman. And I was the child who uncomfortably witnessed this at the age of eleven or twelve. It was my first lesson in sales negotiation that I can recall. It was that moment in time that selling became my birthright and it all started in a flea market in Chicago at the corner of Division & Cicero.

This wasn’t the first flea market I worked in, nor was it my first lesson in sales, but it was the tipping point for understanding the art and skill of negotiation. It was also where I learned confidence. More on that later.

The Lesson Behind The Toaster

I’ve told the “toaster story” so many times. People who meet me for a second or third time at speaking engagements ask me to repeat it. I wasn’t always sure why. ‘Perhaps it’s my emotional delivery that stirs them up’ I would tell myself.

Then, while reading (and by ‘reading’ I mean listening on Audible) Jeb Blount’s INKED, I found myself hearing him talk about learning and practicing negotiating skills in flea markets. Yes!!! It all made sense now! Negotiating has never made me uncomfortable. I’ve been doing it since I was ten, probably younger if I’m being really honest. As I grew into adulthood I would also grow to appreciate my father and the lessons learned in working every weekend with him. He wanted to teach me self-reliance, responsibility, punctuality, how to build rapport and work ethic in general. But I hadn’t really thought about that lesson in negotiating until a few years ago.

Enter that horrifying moment which not only qualified as childhood trauma but would also lay the foundation for becoming the emotionally controlled negotiator that I am today. My father didn’t flinch during this toaster sale. He stuck to his price. He showed no emotion and displayed unwavering confidence. He could care less if it sold. This was his side hustle. His pipeline (day job as a truck driver) was full. More importantly, Carmie loved the game of it and enjoyed the thrill of haggling. He modeled this sales tactic so well that I was able to build the confidence to never get rattled by negotiation and to always ask for what I want. The worst thing that could happen? A buyer walks without putting money in my pocket. And that is not necessarily a bad thing.

People Want What They Cannot Have

In INKED, Jeb says “What humans want most is the thing they can’t have. When buyers find out that an item is non-negotiable, they want it more.”

The other learning lesson from the toaster – value proposition and supply and demand. When that buyer returned, he did so because he realized that the now infamous toaster was either the only one available or was the best one for the price. Or maybe he simply wanted what he could not have. People are funny that way. My father may or may not have known this.

Every morning before the buyers flooded the flea market, Carmie would walk the entire place and chat with the other vendors. What appeared on the outside to be good ol’ fashioned camaraderie was really him researching potential competition. The buyer returning to purchase the toaster for the original five dollar price tag triggered a price change and value perception. And opened the door for further negotiating.

My dad knew the toaster’s value had increased.

My reaction (also known as emotions) and the buyer’s emotions got in the way of clear thinking. The buyer did nothing to leverage the purchase. He showed his desire and frustration but didn’t play the game with my dad. He lacked the emotional control for negotiating. Nor did my dad try to get the sale. He already understood that someone else would come around eventually and that person would pay ten dollars. Sure enough, the right buyer showed up later that day.

It’s not a secret, performing child labor at a flea market really built up my resiliency. It also built my confidence because I practiced objections and negotiation for hours each day (also, being a 10-year-old working at a flea market is kind of like being a boy named Sue, you really earn your chops.)

Besides selling the random array of “essential goods”, my father was also known as the “key man”. He took a home-school course to become a locksmith and we were the proud owners of key machines. Carmie pretty much invented the side hustle. Of course he taught me how to cut keys because why wouldn’t he? Just imagine bringing your keys in only to have them cut by a child.

This happened quite often as Carmine regularly left me in charge of our “booth” while he wandered around making other deals. All day long I would answer to “Where’s the key man?” with an arrogant “I’m his daughter. I know how to make keys.” This was always met with a look of fear, “What if it doesn’t work?” To which I would always respond, “there’s a chance it won’t work and then you’ll bring it back and I’ll re-cut it.”

My father was perceived as the authority. I was the underling. I couldn’t let that prevent my success, especially because of the pressure to do what was expected of me.

For years, I’ve practiced negotiating in every aspect of my life without realizing it. It became second nature. Writing this blog has made me realize the many situations and sales that I’ve unabashedly negotiated over the years (and still do). I look forward to sharing them all with you over time.

But before I go, I’ll leave you with this final flea market story.

Eventually I was offered a job by another vendor across the way. He must’ve saw my ability to sling old toasters and house keys and thought I’d make him a killing selling furniture. It was a cushy job sitting in a much nicer booth for way more money than Carmie was paying. I approached my dad and gave him notice. He took it well. As well as any father could when their daughter quits the family biz to go work for the competition. But I couldn’t quit him without one final negotiation – “I’ll still need you to drive me to the flea market every weekend.”

And so he did. 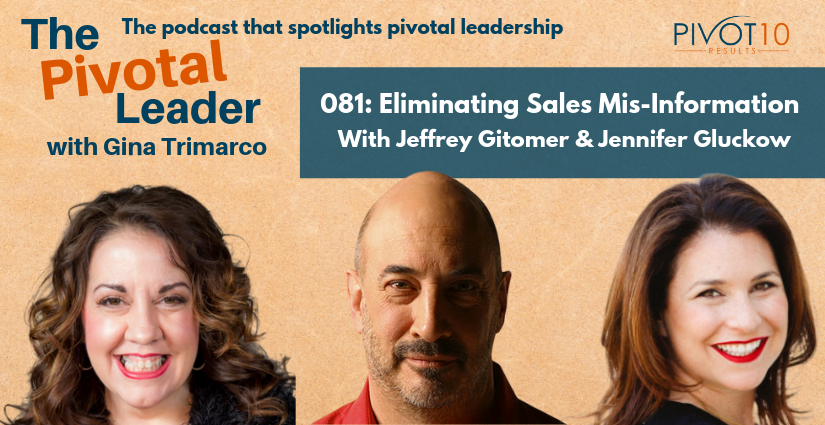 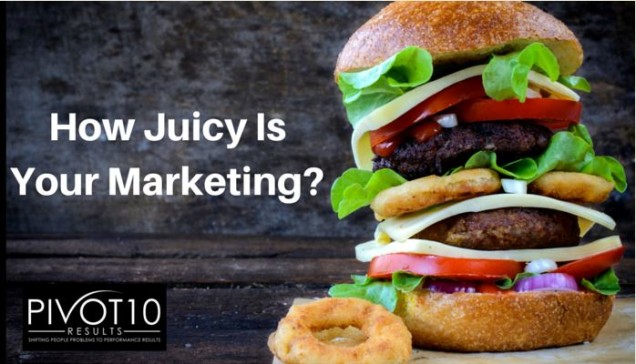 How Juicy Is Your Marketing