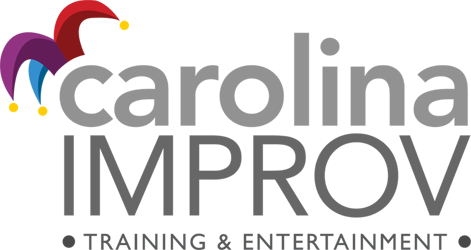 Founder Gina Trimarco founded Carolina Improv Company (CIC) in September 2008 on a fluke because she was in need of a refresher improv class to re-energize herself. She had relocated from her hometown of Chicago to Myrtle Beach in 2007 after being recruited there for a job. Having grown up in Chicago, improv has always been in her blood, especially after studying improv at the famed Second City Conservatory and Players Workshop, as well as being responsible for the marketing of Players Workshop when it moved to the Chicago Center For The Performing Arts.

The overall relocation and new job took such a toll on her that she thought an improv class was just the thing she needed to “re-adjust” her attitude. Improv was always (and still is) her remedy when times got tough. She searched and searched for a place to take classes and sadly discovered that not only did improv not exist in Myrtle Beach, but many people didn’t even know what it was (and many still refer to it as “improve”). Someone suggested that she teach classes and introduce the artform to the Grand Strand. In the spirit of the pillar of improv, “yes, and”, she trained to teach.

One week before teaching her first class she lost her job. With business cards in hand and a website up and running she decided it was meant to be and her first Improv Level 1 class started in November 2008 at the original location of Legends In Concert in Surfside Beach, SC. Ironically, the General Manager of Legends was a Chicago native and offered Gina the space for free on Sunday afternoons.

As the classes grew more popular Gina needed to seek locations that were accessible at night for those who worked during the day and were interested in this new hobby choice. From Legends, CIC moved on to the Theater Of The Republic (TOR) in Conway, using its dance studio and green room. TOR was so busy that CIC quickly overstayed its welcome and had to move again to a photography studio. Exactly one year later (in 2009) the Myrtle Beach Mall offered CIC a space of its own to teach classes and start an improv comedy theater with local residents as the performers.

Gina funded 100% of the theater build out from the sale of her Chicago condo that she was forced to sell when the economy crashed in 2008. She sold the condo in March 2009 and put the money to work. She continues to tell students that they are learning in her “home”.

Uptown Theater, named after the Uptown Theater in Chicago, opened in the Myrtle Beach Mall in November 2009 with shows for all ages, plus more classes. At the same time CIC became the 2009 recipient of the Myrtle Beach Area Chamber of Commerce Business Innovation Award. The popularity of the original Improv Level 101 resulted in more levels of classes for those who became addicted to the artform, with more than 200 students in two years. Due to the popularity of the family friendly shows, audience members put Carolina Improv in the #1 spot on TripAdvisor for Nightlife Attractions in 2010 (and it continues to hold the top spot).

As audience members became repeat customers, new shows were created to appeal to different ages and demographics. Repeat customers are both locals and tourists, with many tourists making CIC their annual family tradition for affordable entertainment for all ages.

While teaching classes and directing shows, Gina also started a business training division to offer companies improv-based training in the areas of customer service, sales and leadership. The word improv still scared some companies. So, in 2016 Pivot10 Results was born as the business training arm of the company. P.S. Gina decided the word “pivot” was another word for improvising in business.

Of course, Gina couldn’t do any of this alone. Over time, an amazing team came together to learn how to direct shows, teach classes and run the business. Carolina Improv is a community that has become a second family to many with the mission to develop people to be the best they can be. One of CIC’s core values is Invite Everyone To The Party to make sure everyone who wants to be included is.

As it approaches its 10th year in business in 2018, Carolina Improv will start offering licenses to people who want to build a similar type of business and community.

What started out as a hobby for Gina, turned into a foundation for everyday life. “The primary tool of improv is re-learning how to say ‘yes’ to whatever presents itself to you in life. When you say ‘yes’ life becomes before interesting and less restrictive. Just watch how children behave. Anything is possible to a child. We forget that as adults,” says Trimarco. “This concept can be applied to anything in life,” she continues. She also believes that “funny just happens”.